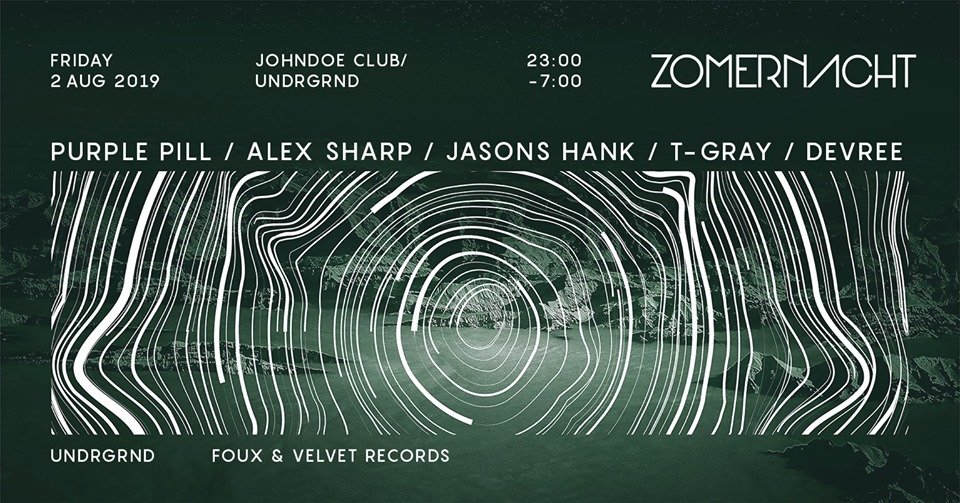 UNDRGRND presents Zomernacht w/ Purple Pill & Foux A beautiful co production between Tel Aviv & Amsterdam, bringing together two brilliant labels that are keeping up the bars in the underground scene.Purple Pill (Velvet Records)Alex Sharp (Late AM Records)Jasons Hank (Foux)T-Gray (Foux)DeVree (Foux)------Hailing from Tel-Aviv Israel which is well known for it’s unstoppable 24/7 underground nightlife, Elkana Paz & Omer Inbar created Purple Pill to share with the world their sounds and production skills that inspired from early influenced world music and made their own unique sound signature. Together they started experimenting new boundaries and live techniques in the digital/analog world in order to define emotions with their music. While keep developing their performance technologies, Purple Pill is building themselves a show to be remembered by telling their story and influences to the audience with tripy grooves and hypnotic vibes while implanting their unique sounds to the world. It's hard not to stay tuned to what they gonna bring next.----Rembrandtplein 31, AmsterdamClub John Doe ( +18 )