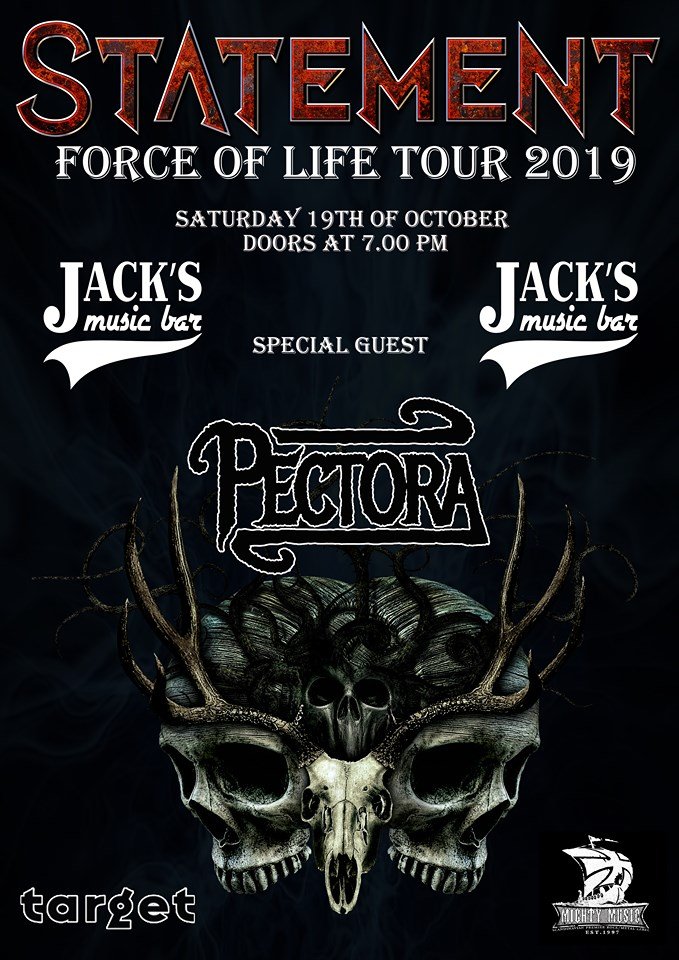 Statement DK comes from the dusty suburban parts of Copenhagen. This is where their flashy melodic hard rock with a touch of a heavier metal element originates.
They released their debut album ”Monsters” in 2014 and their second album “Heaven will Burn” in 2016. Both albums have collected several great reviews from home and abroad, and Japan has shown great interest in the Danish albums, as well as the accompanying single releases with music videos “Heaven Will Burn”, “Madness” and “Created By You”. The Bands singles have been in constant rotation on various FM radio stations.

The Band is known for its energetic performance on stage, and they have a lot of live shows and festivals on their resume. Some of the jobs they have played, includes support for fellow danes PRETTY MAIDS, the legendary kings TESLA (US), and they have taken part in a European tour, with Metallica’s great source of inspiration and NWOBHM pioneers, DIAMOND HEAD (UK). STATEMENT delivers a powerful and energetic show every time, and there is no doubt, they love what they do when they are Rocking the stage!
Looking forward, the band will be playing a lot of shows, and they will start the next year with a UK tour along with GIN ANNIE (UK) Jan.- Feb. 2019.

FORCE OF LIFE is the title of the bands third album, released in march 2019, and the scene it set for what the boys would call a “kick ass” Hard rock album release! This time with Soren Andersen from Medley Studios behind the mixing desk. It gives the band a new and exciting edge, which can be compared to great bands like Scorpions, Metallica and Accept, but also salutes newer modern rock acts like Five Finger Death Punch and Halestorm.

From the country that gave us bands like King Diamond, Pretty Maids and Volbeat comes the newcomers of hard hitting melodic Danish heavy metal: Pectora.

Since the formation of the band in 2013 Roskilde based Pectora have released the demo ”Burgeon Of Hate” in 2014 and the EP ”Redemption” in 2017. All of them leading up to their bombastic debut album ”Untaken” to be released through Mighty Music in May 2019.